Custom AOV are presented in the AOV Selector's Custom section, and can be selected for output to an image layer just like the built-in AOVs. A custom AOVs is represented by shading nodes of a specific type; the node's name defines the AOV name.

Values for color and float custom AOVs can be defined on a per-surface shader basis. These value assignments are contained in a AOV Group, which can be used with one or many surface shaders. 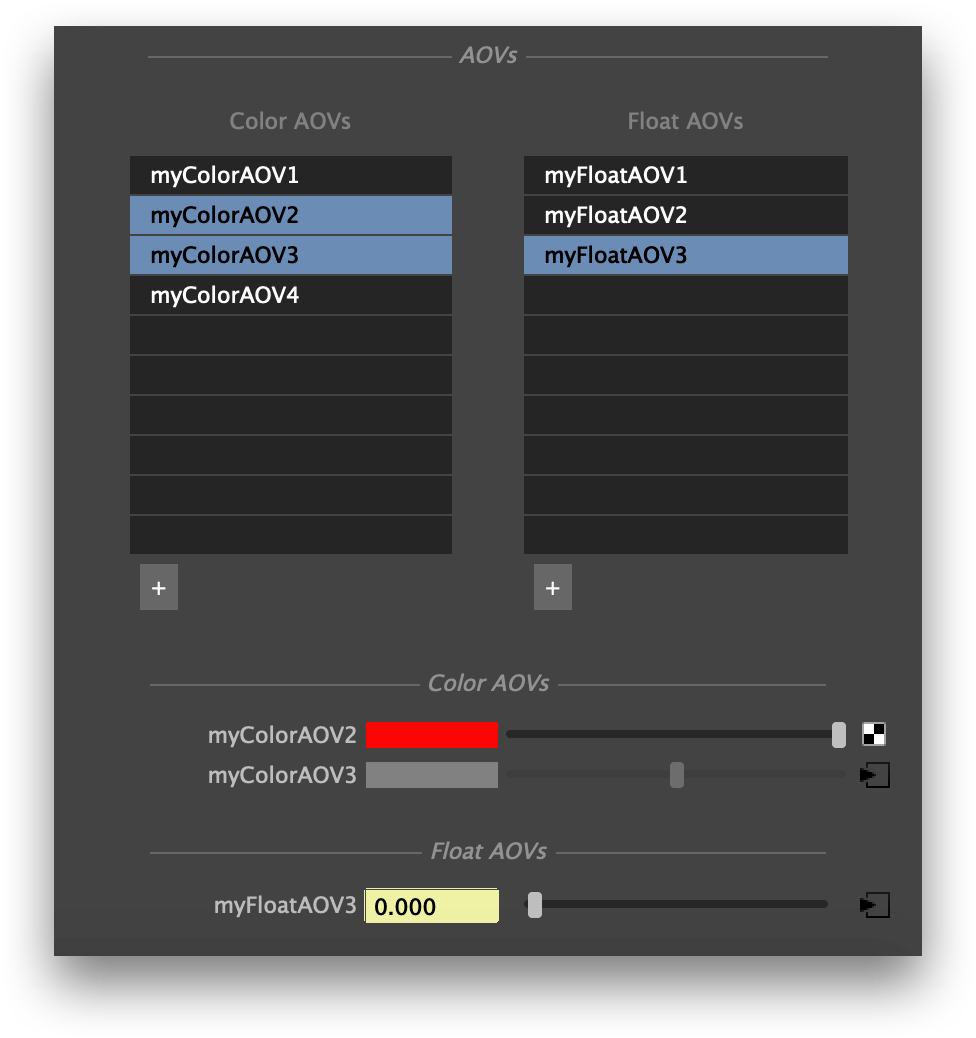 An AOV Group with some custom AOVs.

The AOV Group offers a simple interface to create new AOVs and define value assignments on selected AOVs. An AOV Group can be assigned to a surface shader. All objects that use this surface shader will produce the custom AOV values defined in the AOV Group.

To create and assign a new AOV group to a surface shader, click the + button on the AOV Group row in the surface shader's attributes.

To assign an existing AOV Group, select it in the option menu. To edit the AOV group, click the arrow button.

It is also possible to create an AOV Group from the Hypershade's Create panel, under the 3Delight → AOV section. 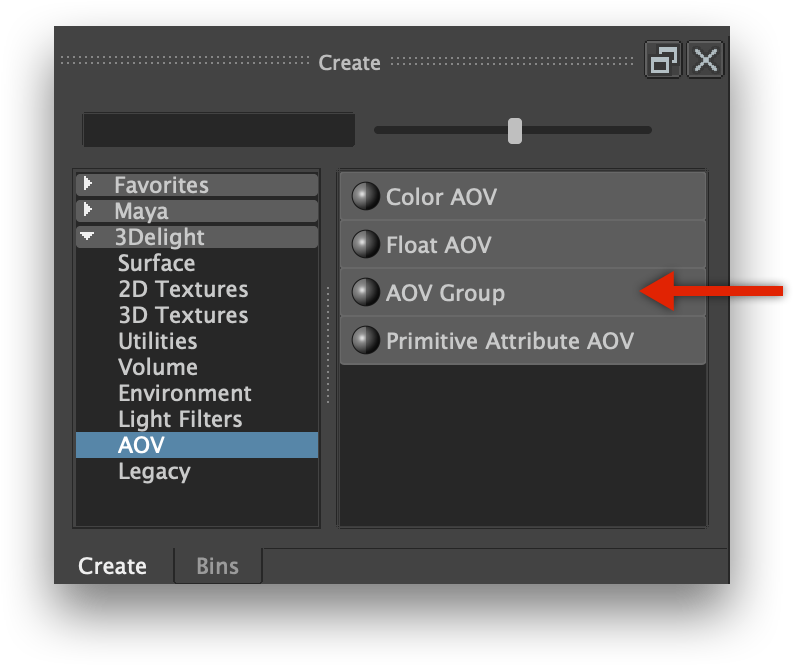 Finally, AOV Groups can be created in the Node Editor by pressing the tab key and typing dlAOVGroup.

Click one of the + button to add a new custom AOV to that list. A name field will appear so the new AOV can be named. Once the name is set, the new AOV will be added to the proper list and its entry in the list will be selected so that its value can be defined.

Once an AOV is selected in the Color AOVs list or the Float AOVs list, a new element will be shown below the lists to allow defining a value for that AOV. It is possible to connect the output of a shading node to this element, as long as it is not the output of a surface shader. 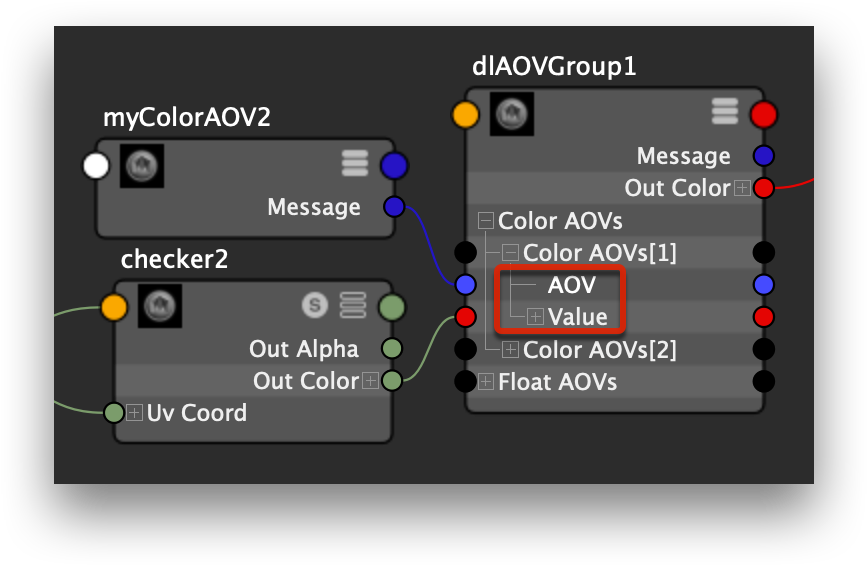 Defining the output of a checker shader as the value of "myColorAOV2" AOV.

To rename a custom AOV, simply edit its node's name. All AOV groups using this custom AOV will be updated automatically.

Color and Float AOV nodes have no editable attribute.

The name of a color AOV node or a float AOV node defines a custom AOV. The AOV value is assigned on a per surface shader basis, through an AOV Group node. To rename the AOV, change its node's name. Color AOV nodes and Float AOV nodes have no editable attributes.

Creating a color AOV or a Float AOV node

They can be created and connected manually to AOV group nodes, but this is easier to achieve using the AOV group node's user interface.

There are a few ways to create a color or float AOV node: 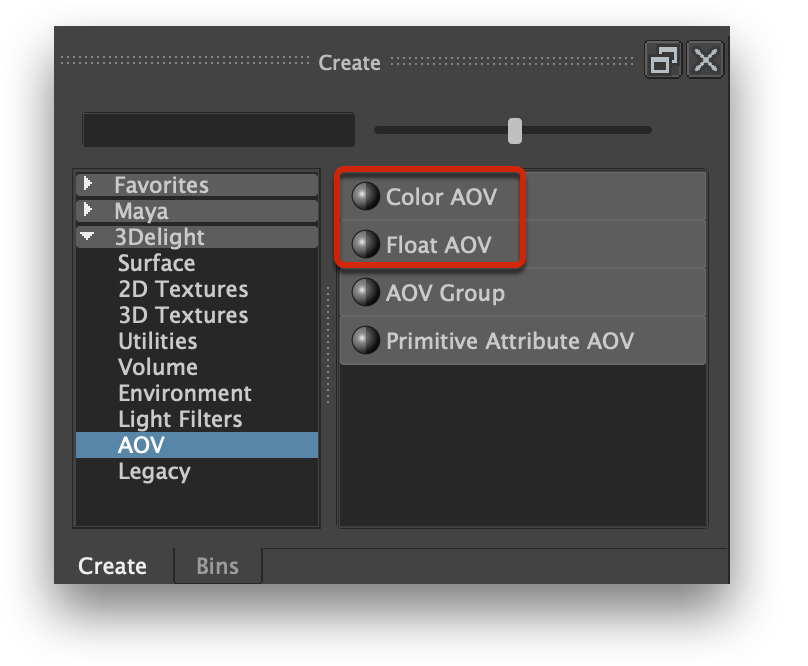 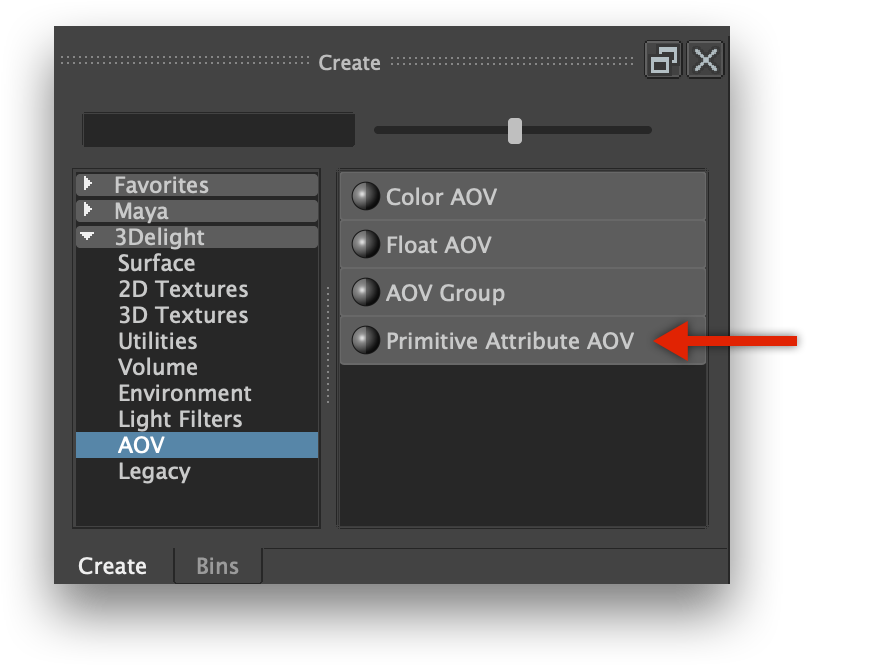 The name of the Primitive Attribute AOV node defines both the name of the primitive attribute and the name of the AOV. The node can be renamed through the usual Maya interface for that action, including editing its name field in the Attribute Editor or the Hypershade's Property panel, or by clicking twice on its name in the Node Editor.

The attribute of a Primitive Attribute AOV node.

The type of data that the AOV will contain. Available output formats are:

A 3D point or vector. This will help differentiate the data from a color in further processing.

A sequence of 4 values, where the fourth value is not an alpha channel.