3Delight adds some attributes to Maya's geometry and transforms. These attributes allow to conveniently toggle 3Delight features on a per-object basis. To control some of these attributes on several objects at once, please refer to Set-Based Attributes. 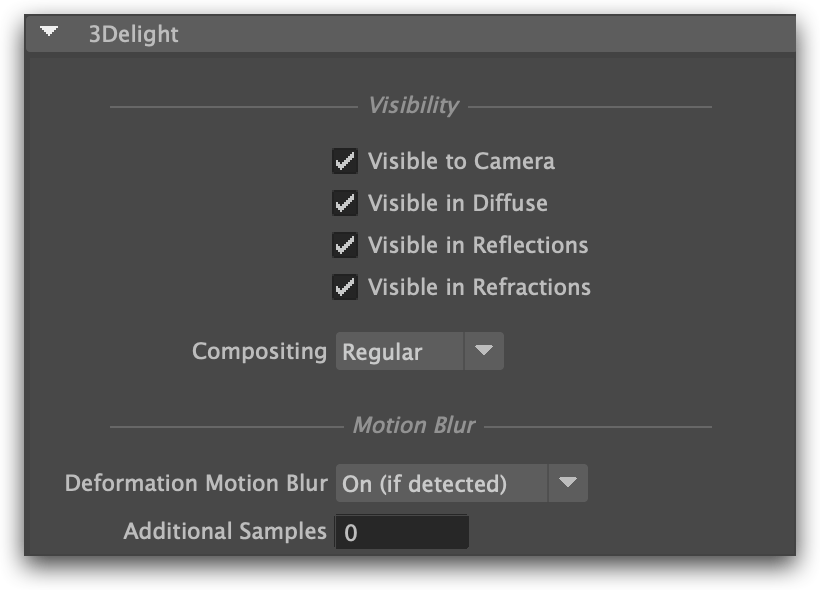 Sets the visibility of the underlying object to camera, diffuse, reflection and refractions ray types, respectively.

Specifies the role played by the attached objects, at the compositing stage. Three options are available.

The objects play no special role and are shaded normally. This is the default.

The objects act as matte holdouts. Matte objects are not shaded and behave as if they were completely opaque, hiding any objects behind them, but appear in the image as transparent black pixels.

The objects are considered to be part of a "prelit" sub-scene, where direct and indirect lighting is baked into the shading. They will reflect light from and towards regular objects in the scene but, just as matte objects, they will appear as transparent black pixels in the primary output variable. This is used to implement Prelit Materials as described in Prelit materials: light transport for live-action elements in production rendering.

If motion blur is disabled in 3Delight's Quality render settings, no deformation blur will rendered regardless of the settings in this section.  Note that 3Delight ignores the Motion Blur attribute in the Render Stats.

Sets deformation blur mode of operation for this object. It can be one of the following options:

The following additional attribute is offered on polygonal mesh objects. 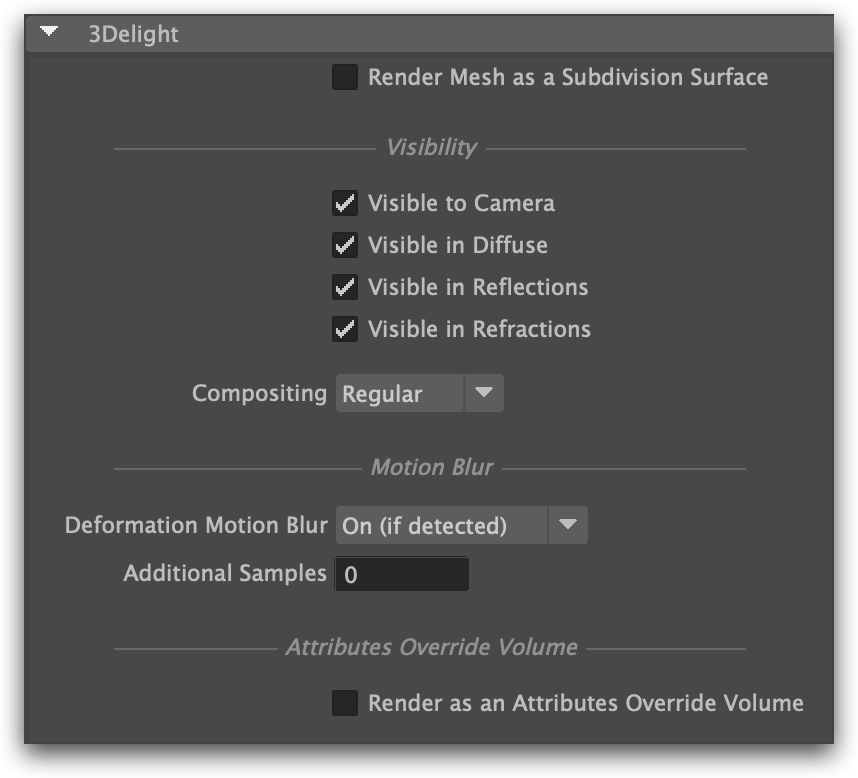 The 3Delight attributes on a mesh object.

Render Mesh as a Subdivision Surface

When on, the underlying object will be rendered as a smooth catmull-clark subdivision surface.

The following additional attribute is offered on curve objects, such as Hair Paint Effects or XGen Groomable Splines Description nodes.

The 3Delight attributes on a curve object.

The 3Delight attributes on a transform.

Specifies how many additional motion samples 3Delight should use with rendering motion blur.  These samples will be applied on the transforms and not on the objects themselves.  For example, if you wish to have more accurate motion blur on rotating propeller, increase Additional Samples on the transform that is responsible of the rotation and not on the propeller's geometry.

If motion blur is disabled in 3Delight's Quality render settings, this attribute will have no effect.  Note that 3Delight ignores the Motion Blur attribute in the Render Stats.

Here is the effect of motion blur on a propeller without the use of Additional Samples: 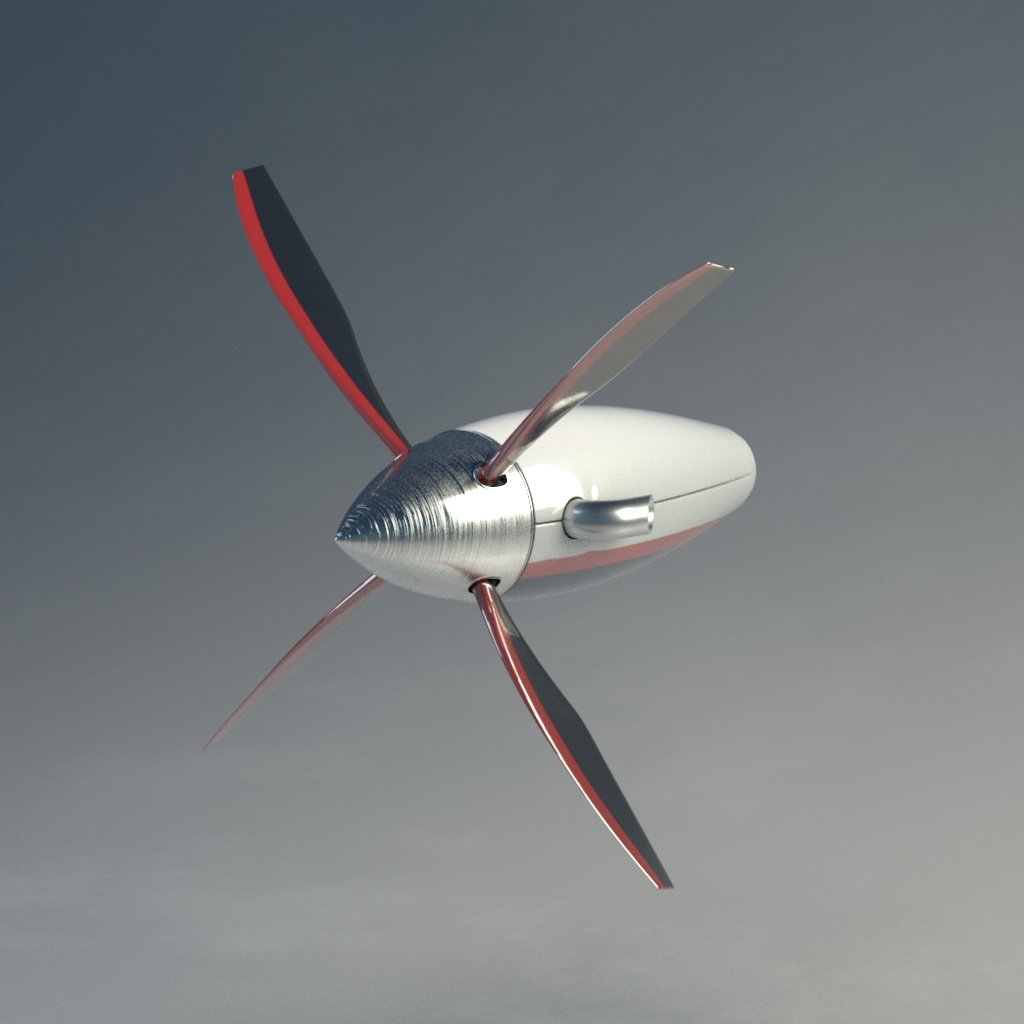 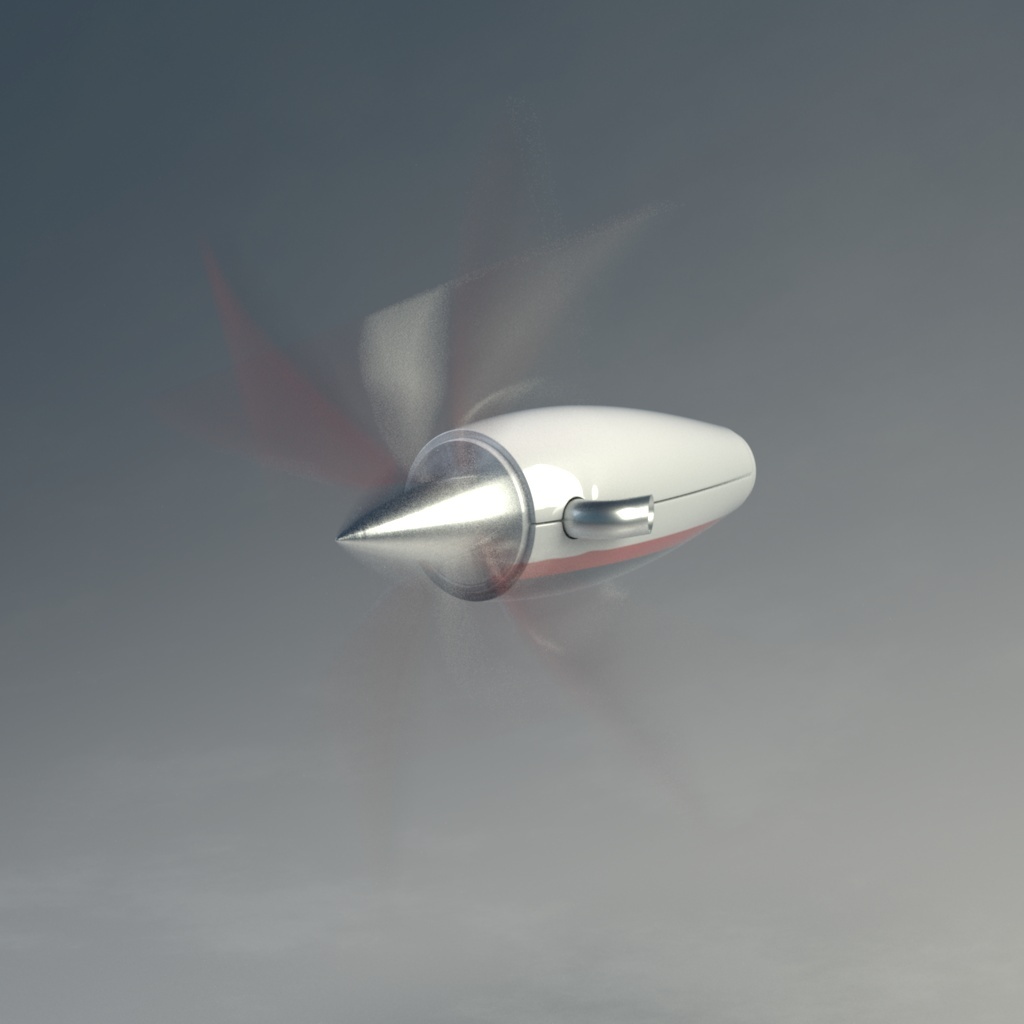 As can be seen in this example, more motion samples are necessary to accurately render the high curvature of the blur. Here is the result when using Additional Samples: 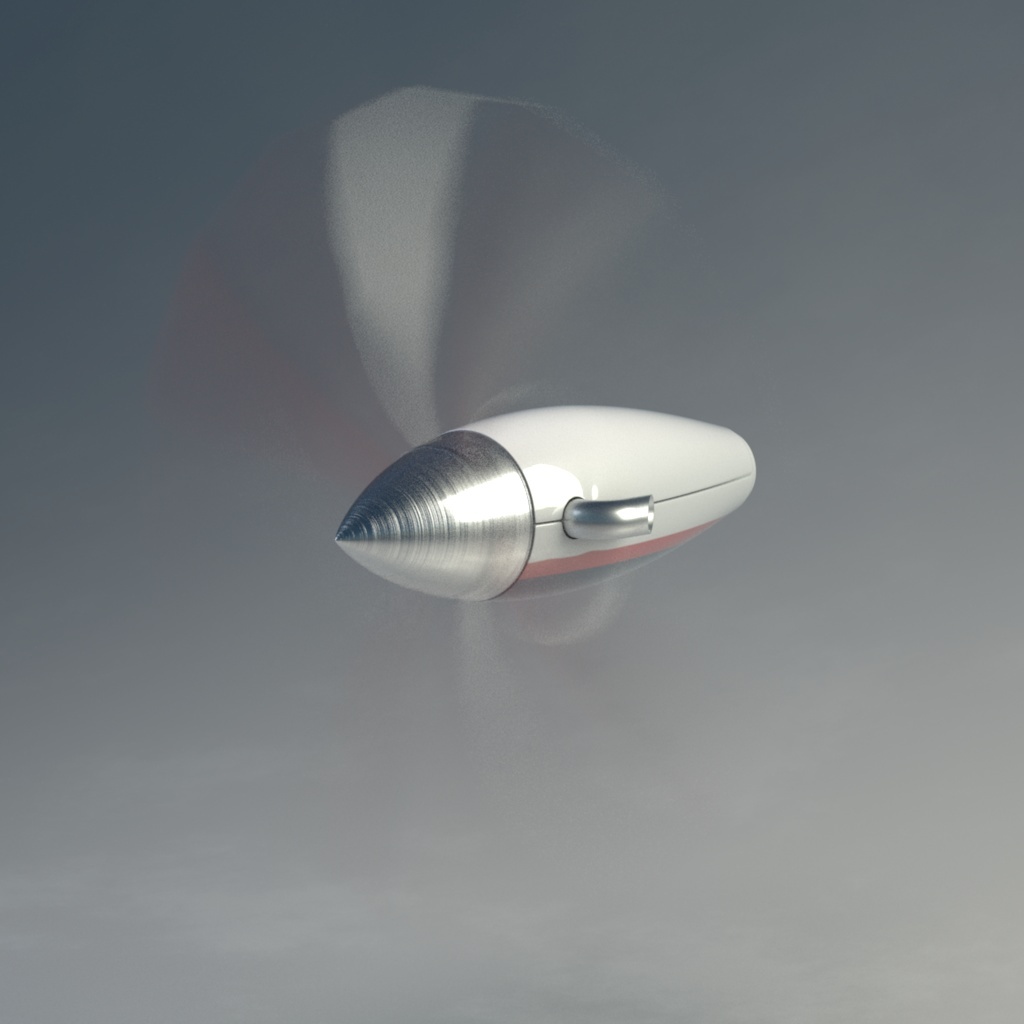 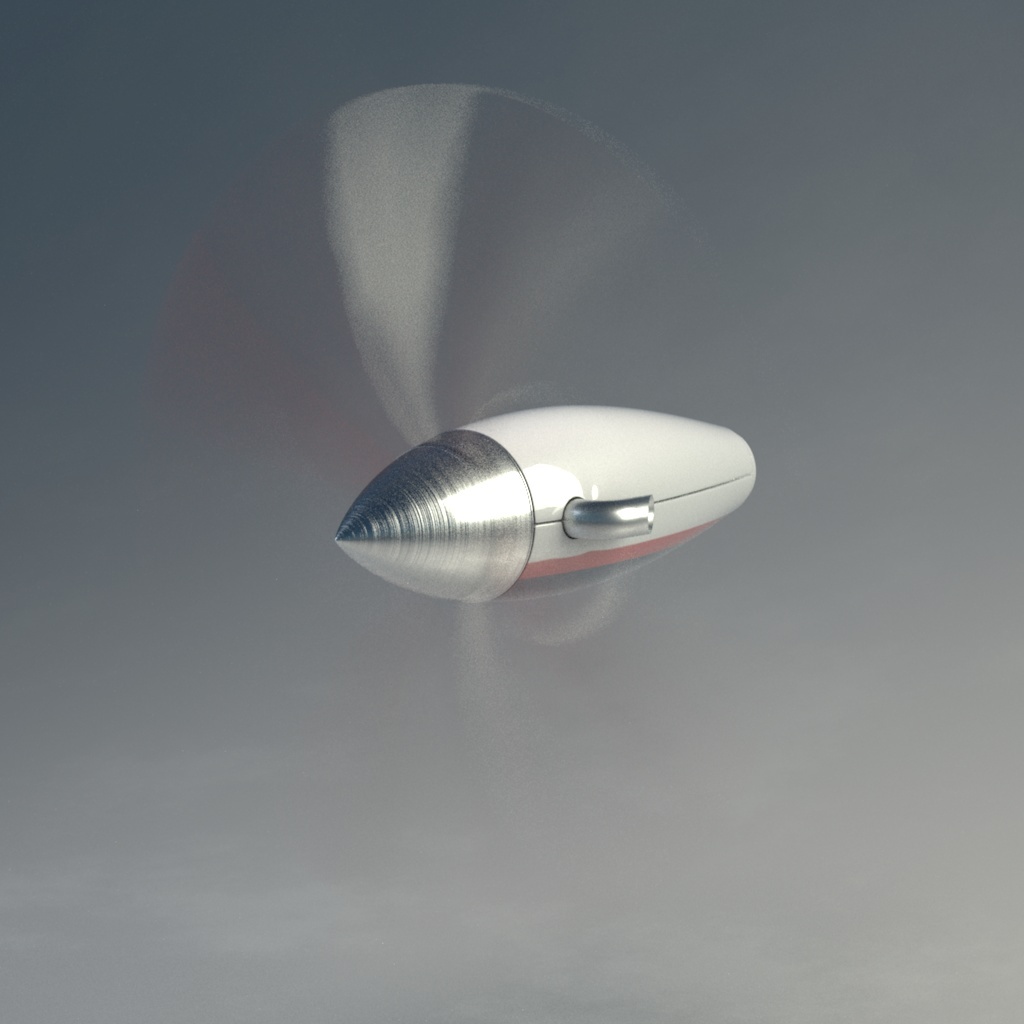 The 3Delight attributes on a displacement shader

Transform displacements into bump. This is the recommended way of doing  bump mapping as it is conceptually close to displacement mapping. Bump maps are more efficient to render but of lesser visually quality than displacement maps.

Specifies the displacement bound for the attached objects, which is the amount by which the bounding box of each object should be increased to include the displaced surfaces. Failure to provide the renderer with a decent value will result in shading artifacts (when the value is too small) or inefficiency (when the value is too large). Refer to this section for details about when you should bother to adjust this value, and how to figure that value. The default value is ‘1.0’. 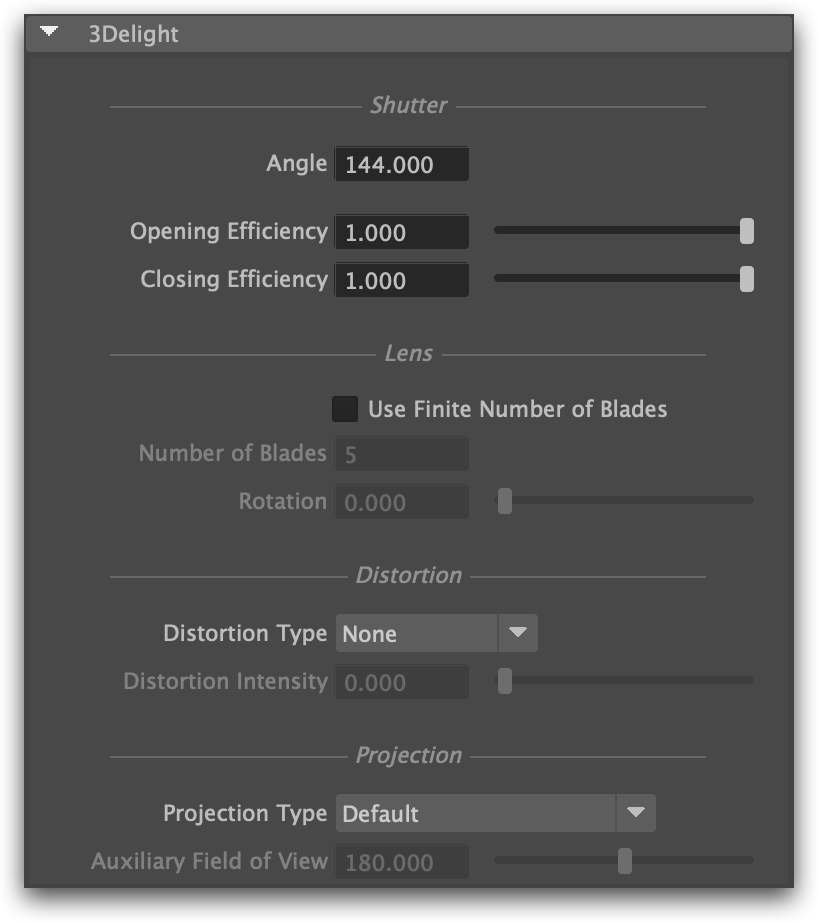 Sets how “efficient” the shutter of the camera is at opening and closing times. ‘1.0’ is maximum efficiency, meaning that the shutter of the camera opens instantaneously, and then closes instantaneously, which is a non-natural shutter. Lower values, such as the default value of ‘0.75’, will simulate slower opening camera shutter and produces softer motion blurs, closer to what is expected in real life cameras.

Use Finite Number of Blades

Turning this attribute on allows customization of the aperture shape using the following attributes. This attribute is off by default, which produces a perfectly round aperture.

The aperture is shaped after a regular polygon; this attribute specifies how many sides this polygon has. This can also been seen as the number of blades of the diaphragm that controls the aperture. The minimum number of blades is 3, which produces triangular out-of-focus highlights.

The angle of the rotation to apply on the aperture, in degrees.

Several projection types are available. The possible values are detailed in a table below.

Specifies a field of view, in degrees. This is used for the following projection types: